You are here: Home / Tid-Bits / Stuck On Pincushions 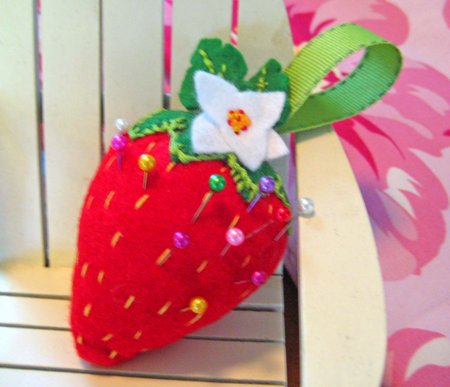 I’m kinda stuck on pincushions right now! I featured Heather Bailey’s beautiful studio recently and fell in love with her strawberry pincushions. Now, I don’t sew too much, but I had to make one for myself. Isn’t it cute? I love just looking at it! 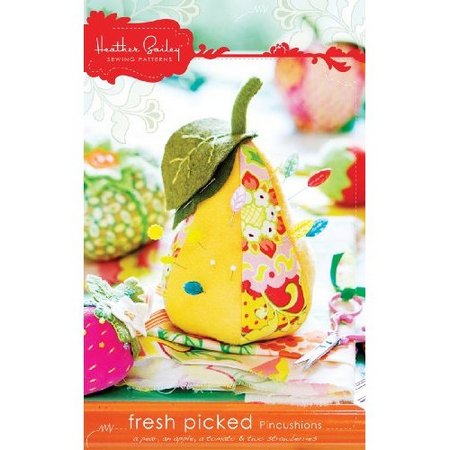 I used a Heather Bailey pattern to make it, and it was super easy.  Maybe I’ll try the pear next.

I started noticing pincushions everywhere, so I’ll share a few of these beauties with you.  Beware…you could become addicted! 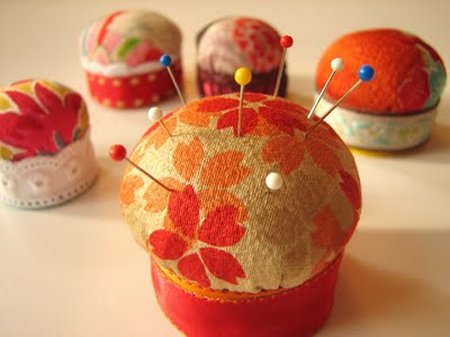 Jessica at How About Orange made these cute little pincushions. She’ll show you how to make one on her blog. You won’t believe what she uses for the base! 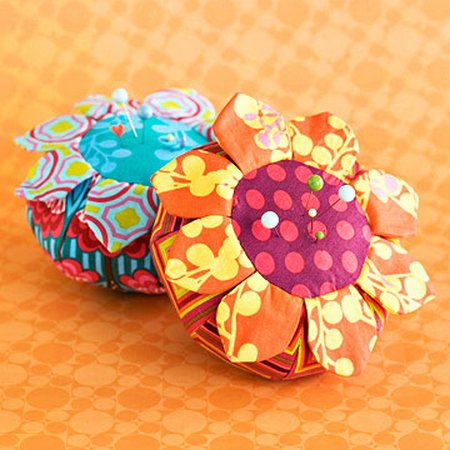 This wildflower pincushion pattern can be found at Better Homes and Gardens. I’d love to see one in a black and white damask pattern!

Have you ever seen a pincushion ring? This was a first for me…ya gotta love Etsy!  Art Nest Shop has made pincushions fashionable!

I was blown away by Tip Nut’s post with 60 pincushion tutorials! WOW!

Martha Stewart has a video tutorial on making a fabulous tea cup pincushion from old sweaters!

Now I just need her giant craft studio so I can store all my supplies nice and neat. I don’t think she would approve of my overflowing basket method of storage!

Pincushions were first recorded in history during the Tudor reign in 15th century England. Metal pins were a very costly and precious items in those early days and before the 15th century were kept in small cases made of bone, ivory, or silver.

During the Tudor era, simple stuffed shapes started to be used instead of the cases. They began by being made of colorful and elaborately decorated silks and linens, replete with tassels and laces.During the Victorian era there was a great deal of emphasis on the parlor room and it became the perfect place in which to display the novelty pincushions of the era. Pincushions were made in the shape of shoes, fans, dolls, teacups, umbrellas, fruits, and vegetables. They were hung on the walls or placed on occasional tables. {Click here for even more info.} 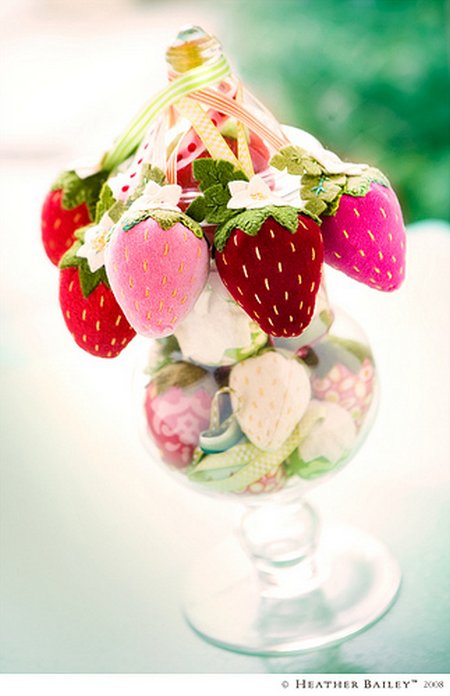 And what would a post about pincushion love be without one more photo of strawberry pincushions??? It would take me forever to make this many, but it might just be worth it. Heather Bailey {Should I just start a fan club, or what?} has pincushion kits available to make it easier for you.

This title of this book says it all…Pretty Little Pincushions. It’s full of beautiful photos and ideas…kinda like fuel for creative folks!

Sometimes I’m all about decorating the house or creating an oasis in my backyard, but right now I’m sewing pincushions!  I love projects that can be done in a hour!  I might have a short attention span. 🙂

What kind of stuff are you stuck on?

I’m joining Julia at Hooked on Houses for Hooked on Fridays…Check it out for yourself!