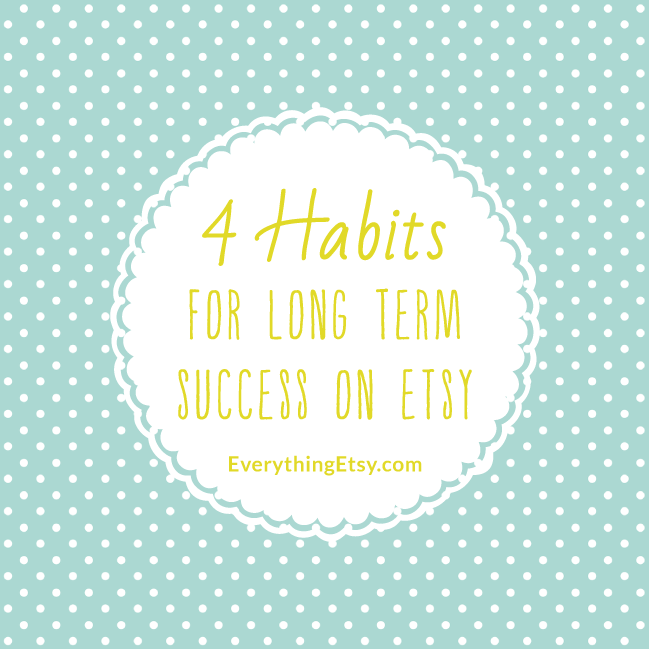 Why do people stop trying? What causes us to be discouraged? What happens to the dream that starts out so bright? More revealing: Why do some experience such great success doing the exact same thing that seemed impossible to another?

There is one very important act that every single successful entrepreneur (Etsypreneur) has done over and over again.

They took the next step. However small. However difficult. They kept putting one foot in front of the other and did not quit.

One of the reasons people quit is because things are taking longer than they expected.

How many of these hard-headed, keep-on-moving-no-matter-how-tired, people experienced overnight success? Pretty much none. It usually takes awhile.

But does that make it any less possible? Does having to wait for your dream make it less worthwhile? Less fulfilling when it arrives? Or does it make it even better? Does it make you even better?

I read a post yesterday on the inspiring blog of MichaelHyatt.com that shared “The Case for Slow Miracles”. In his post, he shared a neat story about a King who didn’t believe in miracles. Here it is:

There once was an king who didn’t believe in miracles. One day, while he was seated in a garden, one of his closest counselors began speaking of the wonderful works of God. He went on and on about how God was constantly at work—in the little things and the big.”

Initially the king listened politely. Finally, however, he had had enough. “Show me a sign,” said the king, “and I will believe.”

The sage thought for a moment. He then pulled something out of his pocket.

“Here are four acorns,” said the counselor. “Please, your Majesty, plant them in the ground. When you are finished, stoop down for a moment and look into this clear pool of water?”

The king did so.

“Now,” said the sage, “look up.” The king looked up and saw four enormous oak trees where he had planted the acorns.

“Wonderful!” the king exclaimed, “this is indeed a miracle—the work of God.”

“How long were you looking into the water?” asked the sage.

“Eighty years have passed as a second,” said the counselor.

Skeptically, the king looked at his garments; they were threadbare. He then looked at his reflection in the water; he had become an old man. His skin was wrinkled and his beard was white.

“There is no miracle here, then,” he said angrily.

“Yes,” said the sage, “but it is God’s work nonetheless, whether he did it in one second or in eighty years.”

Add patience to persistence and you’ll have the two most important ingredients to success selling on Etsy, or in anything else you want to accomplish.

Remember: One Step At A Time!

Another wicked scourge that makes us throw our hands up feeling frustrated and defeated is an emotion described with one word:

I call it an emotion not to dismiss the fact that it is possible to have more to do than you can do, but to call attention to the fact that it’s usually the “feeling” of being overwhelmed that makes us quit, not the to-do list itself.

Just a few days ago, I read another post on the subject of the “Small-Scale Approach to Achieving Great Things” at ZenHabits.net

One of the ideas of this post was to pick out some habit you want to develop or improve on and focus, steadily, on one habit at a time.

For an Etsypreneur, that might be the habit of consistent product creation, making a new product once a week. It might be in developing a community by reaching out and commenting on blogs every day. it could be anything at all.

The idea of working on one habit at a time forces you to focus, and it can greatly reduce the feeling that you have to change everything about the way you do everything, right now! I can tell you for sure, no matter how far you get, or how successful you become, you won’t ever run out of things you wish you were doing better.

Developing a habit now of improving one area at a time is a great way to grow steadily, like that oak tree!

When Something Works, Do It Again! {The Same Way}

The first three habits are:

I first started really thinking about this idea years ago when reading a classic business book on systems called “The E-Myth” by Michael Gerber (Amazon.com link). It’s a great book that I need to dig out and read again!

It wasn’t until just today, though, that I heard the analogy of “following a recipe”. I really think that’s a great analogy, especially for those of us who love to cook!

Check out some of our cooking posts on our personal and very neglected blog, ForeverWherever.com

It’s the same thing in business. Once you figure out that something works, stick with it! Do it over and over again, in the exact same way with just a tweak here and there until it’s totally perfect.

Figure out the steps. Write it down. Do it again and again. The results will take care of themselves.

(more on this at the post on Handmadeology which opened my eyes to the “recipe” thought process… thanks!)

Everybody knows that there are at least seven habits to success, so we would love to hear what habits you find to be critical to keeping your head on straight, your chin-up, and your business growing for long-term success! Tell us in the comments!