You are here: Home / Running Your Etsy Business / Motivation / The Future’s So Bright – I Gotta Wear Shades 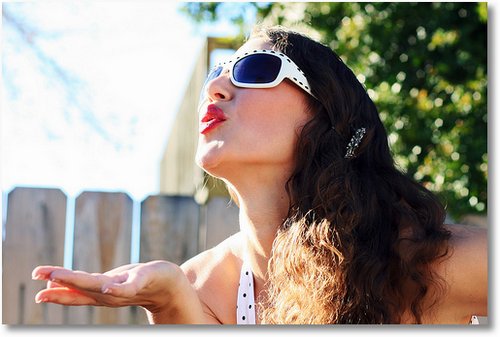 My husband, Tim, got his first pair of prescription eyeglasses last week, the day before he turned 40. While that normally might be frustrating, we were thrilled because a previous opinion had told him glasses wouldn’t help and that he needed eye surgery.

Wrong first opinion? Miraculous answer to lots of fervent prayer? Both? In any case, he can see great and he’s been wearing his new prescription sunglasses all weekend with a big smile on his face.

It made me think of the song I stole this post’s title from.

I missed it the first time around, but I read over the weekend that the President said that just about anyone could be successful selling their products in America today with an Internet connection.

Of course, we already knew that, but he apparently said that (or something along those lines) in the State of the Union Address. That’s a sign of a bright future for online sellers.

Speaking of my husband again, he’s been a building contractor for most of his life. That’s the kind of work that can be hard to succeed at if there aren’t enough people around. That’s one of the reasons he stopped doing that type of work when we moved from a big city to a small town.

If you sell on Etsy, you don’t have that problem. The Internet is huge. Millions of transactions take place every day. Your opportunity is right there.

A case in point is this weekend’s featured Etsy seller. BossysFeltworks sells from a little known place called Orcas Island. We spent a few nights on Orcas Island a couple of years ago and can’t wait to go back. Orcas is outlandishly beautiful, but it is no bustling metropolis. Selling local only would be a limited market on Orcas.

If you find yourself getting frustrated or tired. I hope you decide to keep pushing. There is no stopping you as long as you don’t quit. Keep trying to improve. Keep researching. Keep reading.

If you’re selling online now, you’re in on this thing early. If you’re thinking about it, jump in, the future is bright!