You are here: Home / Running Your Etsy Business / Make it Happen — Shock Every Single One of Them 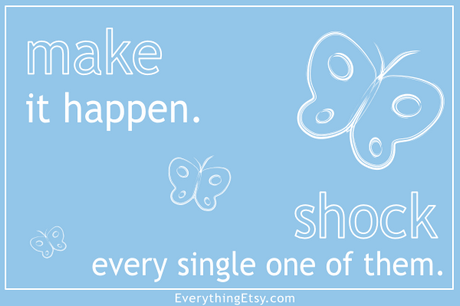 Make it happen. Shock every single one of them.

I’ve seen this phrase zipping around the Internet recently. I can’t tell you where it came from or who first uttered these poetic words, but I can tell you that I’m totally into it.

People are funny. Even the ones that love you and really want to see you succeed are usually right there with the comments that make you doubt yourself.

Do any of these ring a bell?

Here’s what I want to tell you:

Make it happen. Shock every single one of them. You can do it.

… if your dream sounds like that, then you and I are on the same page. But millions of people still live in a world where that looks crazy. A world where it seems impossible.

It’s not easy either. It takes time and it really isn’t without risk.

On the other hand, I think it’s pretty risky to let a dream fall away because people told you you can’t do it. Don’t you think so?

Make it happen. Shock every single one of them.